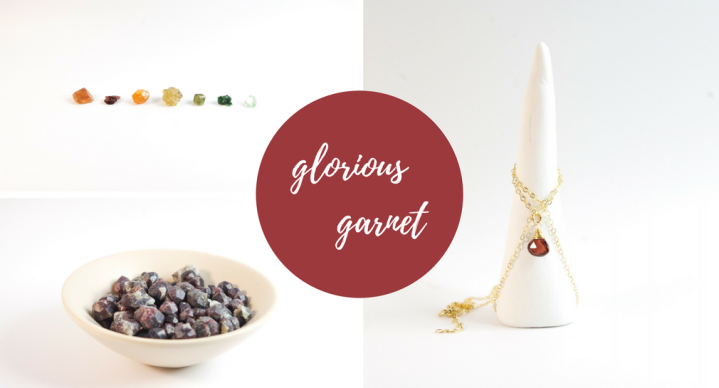 So, it’s been a few weeks since my last blog post. I wanted to publish this particular one a little earlier but life got in the way and I definitely under estimated how difficult it would be for me to try to explain all of these science terms in an easy and understandable way, haha! But hey, it’s still January so as I see it, I made it just in time!

Anyways, this is the first post of what will be a monthly series about birthstones. Each month I will write a post dedicated to its respective birthstone(s) and give you facts about its different properties (colour, shape, hardness), where it can be found and other interesting facts.

I’m going to let my inner geology nerd shine through in these posts which means they will be jam packed with science! But don’t worry I will try and make it fun, interesting and easy for you. My goal is to make you look at each gemstone in a completely new light.

January is of course dedicated to garnets, one of my favourite gemstones due to its beautiful colour diversity, well-developed crystal shapes and it’s geological importance (I’ll come back to that). And also, it’s my birthstone!

Garnets have been used as a gemstone since the Bronze Age due to its commonness, beauty and durability. The word garnet can be thought of as a combination of two old words: the 14th-century English word gernet, which means ‘dark red’, and the Latin word granatus, from granum (‘grain, seed’). The second one is possibly a reference to pomum granatum (pomegranate) whose fruits contain abundant and vivid red seed covers, similar in colour to red garnet crystals.

Garnets are common and widespread minerals and can be found all over the world. They are particularly abundant in metamorphic rocks. Metamorphic rocks are rocks that have been altered by high pressure and temperature during for example a collision that forms mountains and turns granites into gneisses or limestones into marbles.

Although garnets form in all of the colours of the rainbow, garnets are often easy to recognize because they are generally found as well-developed crystals in a cubic crystal form, usually occurring as dodecahedrons, trapezohedrons or a combination of the two. I know, I know, you have no clue what those words mean, but the picture below might do the trick.

The geological importance of garnets

Garnets are more than just beautiful, they play an important role for geologists trying to figure out the genesis of garnet-bearing rocks. Garnets work like record keepers, they store the conditions of which they were formed and altered in. This means that geologists can figure out the temperature and pressure and hence the depth of where a garnet-bearing rock originated. This particular science is called geothermobarometry and was one of my favourite subjects when studying geology! I felt like a detective, figuring out where a particular rock came from and what it had been through since its formation.

The many species of garnets

So, garnets come in a wide variety, can you guess how many garnet species there are? Fifteen! They all follow one general chemical formula: X3Y2Si3O12 , where X can be either calcium, ferrous iron, magnesium or manganese, and Y can be either aluminium, ferric iron, chromium, manganese, silicon, titanium, zirconium or vanadium.

The six largest and most common species are:

Now, this is where it gets complicated, so bear with me as I try to explain. These six garnets are known as end-members and can be divided into two groups. Each group consists of three garnets which simply put mixes with each other during crystallization in what is called solid solution series. This means that almandine (Fe) can mix with both pyrope (Mg) and spessartine (Mn) and grossular (Ca) can mix with both andradite (Fe) and uvavorite (Cr).

With mixing I mean that a garnet is never 100% purely an almandine (100% Fe) for example. There is always a little bit of pyrope (Mg) or spessartine (Mn) mixed in. The name an individual garnet specimen is given is based on the chemical composition and the element (Fe, Mg or Mn) that has the highest percentage.

So, for example, if a garnet is analysed having 80% Fe, 10% Mg and 10% Mn in its composition, that garnet would be classified as an almandine. If a garnet has 60% Mg, 30% Fe and 10% Mn in its composition, it would be classified as a pyrope. And so on. If you take a look at the triangle below though, you see that the mixing has its limits. The yellow area represents the area of all the observed compositions found in garnets. The limitations are due to elemental behaviour during crystallization. I will not go into this further because this is a whole other very complicated topic.

How to distinguish between the 6 most common garnets species

Although you can’t be 100% sure of what type of garnet you are looking at without a chemical analysis done in a lab, there are some features you can use to at least narrow down your guesses. Its colour and where you found it can give you some clues. So if you have some garnets laying around at home that you’d like to try and classify, read on! Below follows some short descriptions for each (major) garnet species that might be able to help you out during your detective work.

Almandine is the most common garnet species and have that deep red colour which garnets most often are associated with. Almandine garnets can be found in granites as well as in metamorphic rocks like mica schists and gneisses.

Pyrope is a fun garnet species because this garnet is an indicator mineral for high-pressure rocks such as diamond-bearing kimberlites, which means that they are used in diamond prospecting! Pyrope normally varies in colour from deep red to black which can make it hard to distinguish from almandine. Rhodolite is a violet-red to pink hued variety of pyrope which chemically is a 2:1 mixture of pyrope and almandine. Colour change or blue garnet is another variety of pyrope which is a mix of pyrope and spessartine. This is the rarest type of garnet. Apart from being found in kimberlites it can also be found in volcanic rocks, which means rocks that have been ejected on to the surface during a volcanic eruption.

Spessartine is most commonly known for its beautiful orange-yellow colour which it gets from the manganese in its composition. Spessartines are mostly more or less orange but they can also be coloured red by substituting the manganese with iron. A vivid bright tangerine orange variety has the aptly name mandarin garnet. Gemstone quality spessartine is rare but is most often found in granite pegmatites.

Andradite may be red, yellow, brown, green or black. There are three recognized varieties of andradite garnets: topazolite, demantoid and melanite. Topazolite is golden-yellow to olive coloured. Demantoid is yellow-green to emerald-green and has been called the ‘emerald of the Urals’, it is one of the most prized garnet varieties. Melanite crystals are opaque and black. Andradite garnets are commonly found in contact-metamorphosed limestone and in mafic igneous rocks.

Uvavorite is a rather rare garnet species which is bright green in colour. Uvavorite crystals are brittle and almost always too small to be cut as gemstones. Some of the largest crystals come from Outokumpu, Finland. Uvavorite is found in chromium-bearing rocks such as serpentines.

I hope you enjoyed my first more science-y blog post about garnets. I had a lot of fun writing it but I have to admit, it took me quite a while and I’m still not sure I managed to explain everything good enough. But I had a deadline to stick to and hopefully I will get better at explaining with each birthstone post I write!

If you liked this post or if you have any questions about anything, please leave a comment 🙂 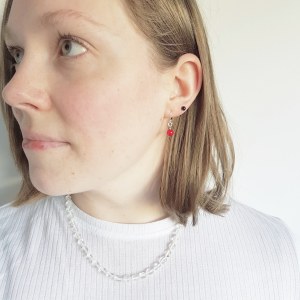